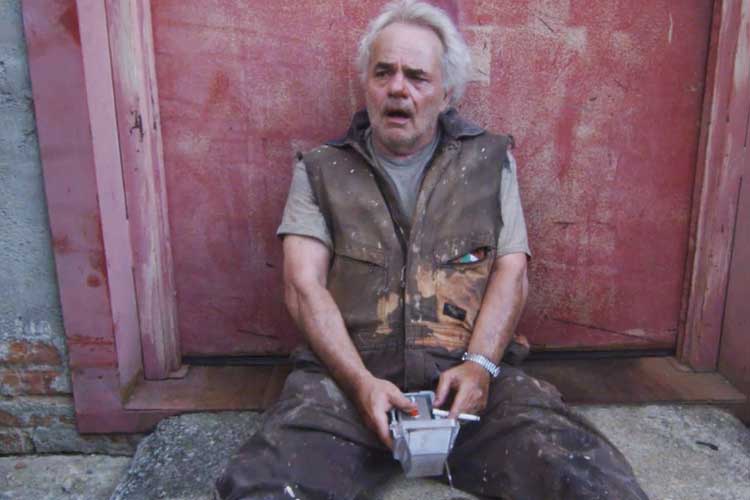 RICHARD “PAP” MAYFLOWER is a grief-stricken, broken-down man. Last year he buried Mae, his beloved wife of forty years. And today marks one month since his only child, Junior, while deployed in Afghanistan, was killed by a car bomb. A small shrine for his son is in Pap’s living room. A makeshift battlefield cross memorial is erected in his front yard.

Since Mae’s passing, Pap’s only respite is communing with her in her frozen-in-time, meticulously kept bedroom. It’s Eden compared to the rest of his house.

Pap’s not alone in his grief. His wily eight-year-old granddaughter RICKI lives with him. In fact, she’s responsible for the nickname “Pap.” It’s just the two of them. Her mother abandoned her years ago and can’t be found now. Since her grandmother’s passing, her good-buddy-Pap has changed. Gotten gloomy. But she’s taken to mirroring him, even smoking his discarded cigarette butts.

After his son’s death, Pap has obsessively focused his grief, despair, and seething rage on a secret plan. And this is the day he’ll finally see it through. Today, he will drop Ricki off with the only person she has left, her estranged, vamp aunt TAMMY and avenge his son. He will truck bomb a mosque.

Assuming Ricki is safe with Tammy, Pap arrives at the Al-Jamia Islamic Center with his haphazard explosives hidden in his truck bed beneath a worn tarp. He grabs his crude remote detonator.  He enables his igniter’s switch. But his plan is interrupted when he finds Ricki, oblivious, hiding in his flatbed, the noxious explosives surrounding her. Frustrated, he berates her, drags her away from the truck, and plants her beyond the blast zone.

Nerves and frailty topple Pap next to a dumpster, an ideal position, out of sight of his truck… and the impending blast.

Ricki’s startled by a pedestrian and sprints away from her post.

Simultaneously, Ricki finds her way back to his truck. She climbs in the cab, three feet from the bomb. The mosque empties. Innocently unaware congregants mill around, fellowship. Their children play tag.

Pap’s hunkered down. In position. Focused on his red button. His anguish will be gone.

In a flash, just feet from him, a young Muslim BOY appears. Ethereal. An apparition?

Pap’s thumb hovers over his button. In a moment, his life will change forever.